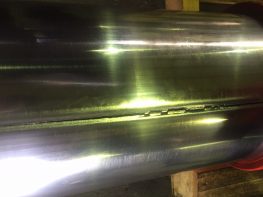 When defining pressure intensification in hydraulic cylinders, it all comes down to the total scope of the surface differential between the surface area of the full bore end, and the usable surface area in the rod end.

In a typical double acting multi stage hoist cylinder, the surface area ratio could be as high as 8:1 as the annulus area is quite thin.

We come across a case where a large telescopic cylinder had a ratio as high as 14.24:1. So to get an idea of the potential pressure involved: if we have a pressure of 1800psi being applied to the full bore end, and the oil cannot escape from the rod end, then the intensified pressure could be as high as 25600psi.

Now, it probably never achieved the 25600psi pressure because the cylinder stage failed (see the photo for actual damage that occurred in the first stage of the cylinder). This potential pressure would have dissipated once failure occurred.

Hopefully with an understanding of how intensification can occur such costly failures can be avoided in the future.